A Visit to Evening Sky Brewery in Burlington

One of the newest breweries to open in Connecticut and the first in Burlington is Evening Sky Brewing Company.  Checking out their website first left me with pretty much no information (there is a post on their Facebook page mentioning they will have ‘a real website’ soon.)  Some solid reviews on Google and a fair starting score on Untappd led me to the decision to go check them out. The brewery is right on the highway, but your navigation isn’t going to direct you to the door.  Located at 280 Spielman Hwy, Burlington, CT, the entrance facing the highway is only going to get you into the Brewery offices, where you can’t buy a beer.
Drive around to the right of the building to find the ramp that leads to the bar entrance. You’ll see the brewing equipment through the windows on the right of the ramp, with the office building on the left. 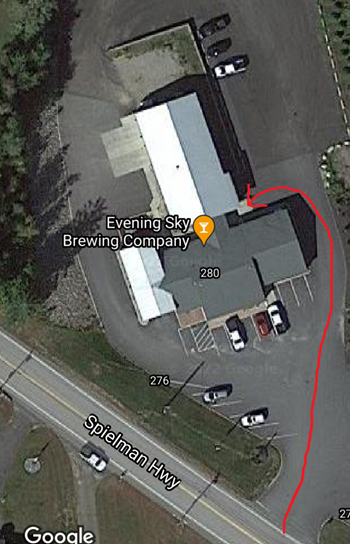 Since I had the whole family with me, I went in first to ask if ‘well behaved children are allowed’.  They said yes, and jokingly suggested that if they were well behaved, maybe they didn’t belong.  So, we all went in.

The kids loved the free video games.  I could get them a soda, while I got myself a flight of 4 beers for $10.  There were six available at the time, so I had to choose 2 not to include.  One decision was easy for me, since I’ve rarely had a chili beer I liked, and let the bartender choose the 4 for me.

I decided to drink them in the order of lightest expected flavor to heaviest and went with the Copper Ale first (#10). A solid beer and described perfectly as the flavor was right in between a brown ale and a red ale.  Slight spice, but malt forward. There is a hint of post fermentation oxidation, but not enough to remove from its drinkability. Before deciding to add the Cranberry Ale (#9) to the flight, I asked if it was sour.  I find many brewers unintentionally wind up with sour fruit beers, and while my wife likes sour beers, I generally don’t enjoy them.  To my happy surprise, they said it wasn’t, and they were right.  The cranberry is subtle, but there enough to make this a great beer to pair with turkey, or any other foul. The oxidation was also there on this beer, but again, only slightly. Next up was the Mocha Porter (#4).  This one is worth the trip alone.  Heavy malt and light hops, as a porter should be with very upfront coffee and chocolate notes.  This beer is perfect and heavy.  I’m coming back for this one but likely only one, since I imagine a full glass of this would be very filling.  Might it be better classified as a stout?  Maybe…. But who really cares?  Last up, and what I expected to be the strongest flavor, was the New England IPA (#1).  They should add ‘hazy’ to the description since that’s on trend and something people are excited about. Regardless, I was pleasantly surprised.  This beer is well balanced for an IPA, and a beer I could kick back with and enjoy on the porch, poolside, or while watching sports.  It was the right beer to have last, and much like most IPA’s, will change the flavor of any food aside from the saltiest of snacks.

Chatting with the owners during the tasting, I find out they have been open for just a few months.  They plan to package beer in the future to take home (I would have taken some of the Mocha Porter if I could). They put a high value on freshness, and because of that, don’t want to package in growlers.  Evening Sky Brewing Company has an owners’ group with varied tastes in beer, so I expect they won’t be simply an IPA pump.  You can expect a wide range of beers and flavors available.  I for one am looking forward to seeing their inevitable growth during my multiple future visits.